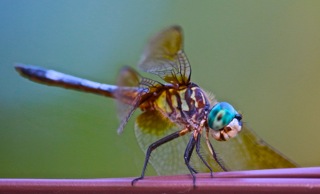 As I began several years ago to categorize photos, I started to place all of my smaller more detail work (macros) into my “Artscape” category. Although, I love the outdoors and nature, I’m always taken back by the endless possibilities to capture it. Such is this months photo, the dragon fly in southeastern United States during the summer season has some incredible details. I’ll mention a few of the extreme details here for the Blue Duster (Genus name; Pachydiplax) sometimes called the Blue Dasher. It has the ability to fly at minimum speeds of 20-35 mph and much faster. It can catch it’s prey in flight by using it’s compound eyes containing thousands of composite elements which allow it to see in ALL directions,
and by using it’s long legs in a net or web like funnel to catch the victim.
it’s an eating machine (a carnivorous) through June and the summer months. It feeds on smaller softer insects like mosquitoes, flies, moths, tadpoles, butterflies, flying ants and termites. I’m truly blessed to have the opportunity to take a macro photo of the “Blue Duster”. I value your opinion and comments on this photo.
GBU,
DanielHartsfield.com
Outdoor Photography

WELCOME TO MY BLOG